A special cousin of mine gathered the family to third and fourth cousins for a synchronized zoom meeting this summer. It was a gesture of good will, it really was since there were many of us who didn’t know each other and he painstakingly sought each one of us out for the right time, the same time. I chose to wear a baseball hat and prayed to blend into the background. I don’t know if you know this, but just BEING a settler has you standing out before the show even starts. (I was recently asked if I became a Rastafarian because of the head gear) People have become very opinionated these days and I don’t exactly fit into the genre of liberal left-wing America (or Europe or Israel for that matter), as the bulk of the cousins are. I was already fully knowing the zeal for BLM, supporting mayhem and disorder -the agenda – giving vent to in many Jewish circles believe it or not- just see what is going on in Kenosha at the Reform Jewish Center or in Berkley, I chose to say I’ll just chalk this meeting up to Tikkun Olam and thank my cousin and be there on zoom. Before I was even able to say a word when my turn came to say who I was and where I lived, I was castrated, cut down. One distant cousin from England asked where I was from and before I could form the first syllable “They live in the West Bank and they MUST LEAVE!” shot out the mouth of a different cousin’s wife- a dedicated radical left wing Israeli. I sank deeper and deeper behind the brim of my baseball cap as Moshe poked into me hard from the side insisting I do not leave the forum under any circumstance. Not new to me, I’ve dealt with this on a professional level (Avigayil O’Hare dearest- remember Boston?) This was not about me. This was about Ki Tavo, the land of Gerizim and Eval, the land of the covenant. This was about home. Breathe easy Breathe easy.

We are living in a time of great divide. In a dastardly twisted reframing of the idea of meaningfulness, for many this means venting out and for many others who passively sit back and support the freak out, slaves to the norm. There is a raging mob exploding somewhere- on a path to destruction. Good people are targeted while bad people become elevated. The victims the culprits and the culprits, the victims. There is chaos all over. At the same time, we are living in a time of blatant miracles too, in restoration, fulfillment of prophecy and Israel becoming recognized in a phenomenal world -wide way. This manifestation cannot be ignored on any level – it’s in your face. Turn on any news Chanel. This is the way we can distinguish good from evil, when they juxtapose so obviously. These two forces are at battle to gain dominance. This is the scale. How do we fit in? How do we achieve balance? The blessings and the curses are about life. The ones mentioned in Ki Tavo talk about a new identity unfolding on the gates of the Land of Israel. It’s about the actualization of Hashem’s plan if you just don’t go and get distracted and do the wrong thing. Blessings and curses we bring upon ourselves. There is free choice. What makes us feel alive? What will bring us continuity? What will add more branches unto the family tree?

We walked through the desert so thirsty to reach the point of covenant. Hashem clearly promises here on these two mountains the perfect recipe – If you listen to My commandments and keep them, you will be healed from slave mentality. Yes, you can be a mover and shaker, not a pawn in the urge to serve a false idol. At the tail end of the zoom meeting the same cousin who had asked me where I live before I was gagged asked, “prey tell me where you live, Leah! Where is it on the map?” Apparently despite the propaganda someone was still weighing the scales here. “We live one hour east of cousin X (the one who shouted me down)- on the map of Israel it is right in the heart of the country.” Then the cousin who initiated the zoom meeting said,” Yes. And we should all meet there as soon as Covid is over. They make a wicked barbeque.” 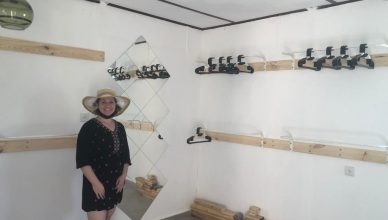