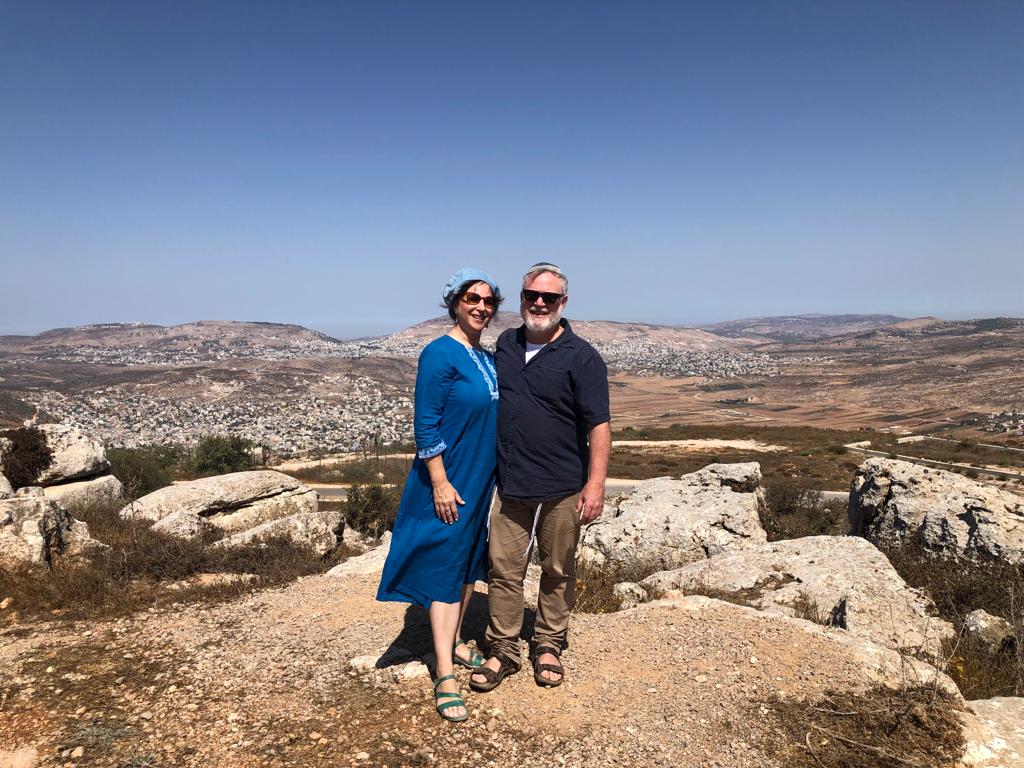 It’s always thrilling to me to ride up Mount Gerizim and Mount Eval. In the realm of so distinguished a territory, it makes me heady and ready to follow a willfulness unexplained since the days of Abraham. Up on top of one mountain, I can see and hear farther to the next as if it were standing next to me. These mountains play tricks, they speak to you. Exotic yet familiar, anonymous yet known; this place feels remote. Still, it was and is the portal of the Land of Israel, the center of the Via Maris. Down below in the valley is a place not mentioned in our portion this week (strangely so!), the ancient and bustling city of Shechem. Here lies the timeworn antique road used by our Patriarchs. Bisected, the road runs north- south in a pattern of ruler straight form dotted with consecutive stops along the way: Shilo, Bet El, Yerushalayim, Bethlehem, Chevron and Beer Sheva (further south is the Red Sea). Due east- west: the way of the sun (Vadi Tirtzah)- Jordan, Syria, Iraq- due west- the Mediterranean Sea.

Mount Gerizim and Mount Eval form a perfect amphitheater in acoustics and even in the way the mountains slope down facing each other, as the Children of Israel faced each other on the day of the Covenant this portion speaks about. The character of Shechem is of twined realities, of blessing and curse, of Dina that came to look but did not see. At this mid- point of the Land of Israel, the ark stood between the mountains, surrounded by the Levites. Here G-d’s voice does not emanate from within the fire as it did in the burning bush or at Sinai – there is a hidden aspect here, unchartered with no obvious miracles. Bad things can happen here if we don’t see. Here we must collect ourselves to the Torah- our everlasting covenant and fill up the battery of extrasensory perception. Here it is our voice that is heard. The six tribes on each mountain had the sixth sense. This is the place of Yosef- who is represented by the number 6. Surviving in as carnal a place as Mitzrayim, he described himself as “I am an Ivri; I was forcibly carried off from the Land of the Hebrews, and even here I have done nothing to deserve being put in the dungeon.” Yosef identifies and remains righteous; even when life was living hell as his brothers sold him, as he was wrongfully accused. Seeing that image of his father in hard times and having the knowledge of who his father was as a Patriarch of Israel that desired Hashem and was close to Him by following His word, empowered him with the ability to see. Even when it seemed he was being cursed, he was ultimately blessed. In the long run, Yosef the “seer” was “freed from bondage”.

Abraham himself came to this place first- עד מקום שכם” “Up to the place of Shechem.” Ya’akov purchased it, Shimon and Levi redeemed it. It is the place of ultimate craving for G-d, of true redemption and telepathy. It is the place we are told to choose. In the case of Shechem Ben Chamore and Dina it was a cursed unbridled desire. In blessing it teaches how to identify with Torah and incorporate mitzvoth into your life as a way of life where you channel your desires into morality. We don’t just eat meat- we sanctify it.

The Covenant of the Blessing and the Curse come to teach us an important lesson for all generations. This might have been a one -time event but the message is eternal. There is a responsibility and accountability to being Jewish and following the Torah path. You need to see, even when it’s dark, even if you are sitting in a dungeon, even if this heritage site is being plowed at this very moment. Climbing up to Mount Eval today is not an easy task but I am willing. You must pass through many barricades to get there hoping you don’t get shot on. Israel has relinquished her integrity here and is not in complete control.  The stone slabs of our ancient time on this mountain still stand as the holiness of their commemoration mark everlasting glory even as they crumble. G-d plays hide and seek. SEEK HIM