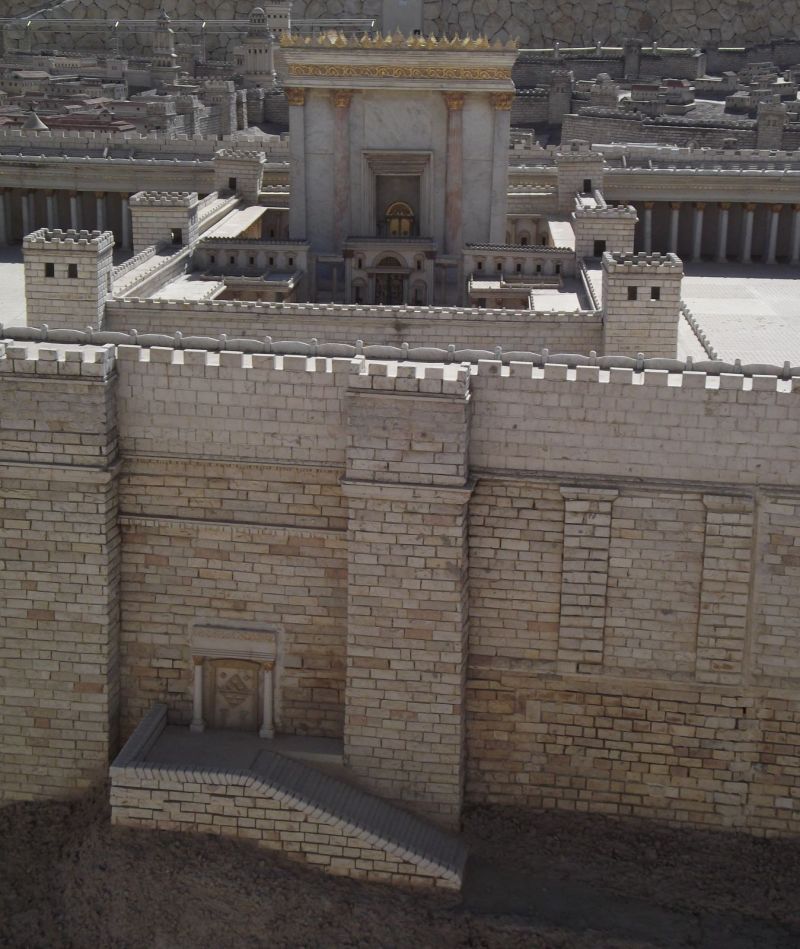 Even before Babylon came crashing down unto Jerusalem, before her outer walls were even ruptured, King Yehoshiyahu took the broken and whole tablets that Moshe Rabbeinu stored in the Ark of the Covenant and hid them somewhere in a cleft in the rocks and down the pits of Mount Moriah. Golden shields of the Temple guards as well as all the golden bricks and vessels, the silver instruments and copper sink and tubs and many cups and lavers were all carried away but the tablets of stone remained untouched and hidden to this day. The splendor of the Temple was often paraded about at Babylonian coronations and at kingly crownings like those of Achashverosh at his banquets. Eventually Persia conquered Babylon and a handful of Jews returned to Israel to build the Second Temple. At first it was simple but through time became restored and stood for centuries as the first one did. King Herod commanded it be of the highest imperial magnificence but it lacked the intense level of the prophecy it had once had. Before it’s destruction at the hands of the Romans, cryptic scrolls were written about it’s treasures hidden east near the Dead sea. Mystery still surrounds the secrets of the where all the vessels of the Second Temple may be. The arch of Titus has illustrated that the menorah was taken to Rome and rumors have it that even precious jewels made their way to England where perhaps Vikings stole them. Some say all the gold was melted down in Kush, Africa. All nations boasted the booty but not so much as it belonged to Hashem but of the carnal value of it. Thousands of years passed and the severed pieces of the tablets alongside the comforting perfect ones still rest securely in the same place Hashem chose to be His mountain and Home, untouched.

Ki Tissa is all about obedience. It’s about a cracked covenant and about it’s tikkun. The intimate relationship of Am Yisrael with Hashem that was rectified with every person giving something to build the Mishkan out of kapara for lust of a golden calf. Israel was severed into pieces for similar mistakes it made through history. Our house was torn down. The Land was demolished. We were separated. Now comes the time of perfect unbroken promise. The four chambers of our hearts, two broken, two whole, are beating faster now. The nations now have a stake at this as Zephania stated- ” Then I will restore and purify the lips of ALL people that they may call upon the name of Hashem and serve Him shoulder to shoulder.” The light of the future Temple will raise the nations and fix them. This is referenced to on the highest level of all prophesies. The truth will be hidden in the thickest of husks at these end times, confusion will reign, the antithesis of the “Crown’ will dominate (as we are witness to in “Corona” and the obsession of the media with the English monarchy’s (“so called”) dramas). The prophet demonstrates in his words “shoulder to shoulder” the uncanny ability Yosef Hatzaddik had in rising above in Mitzrayim which was steeped in servitude to golden cows, carnal darkness and death. It was Yosef who received the blessing ” And I gave you Shechem ECHAD ” a reference to “Shoulder to shoulder”. The prophet says that individual people as well as entire nations can reach the same level of purity and obedience to the one true G-d as Yosef did and that they will be the ones to fix and rectify the troubles of these times as prophesized by Isaiah -61:5, “Strangers will shepherd your flocks, foreigners will work your fields and vineyards.” The nations of the world can and WILL participate in the rebuilding of Israel and the Temple. The ICC in Hague may decide outlandish anti-Semitic allegations; Iran is set on attacking- defiant, countries call the heart of Israel Palestine and plan to divide Jerusalem, but WE KNOW TRUTH. Friends, it’s not enough to know truth. We must ACT on it. NOW. Every brick we build here, every field we plow.

We are heading towards Pesach now. The imagery is of breaking off a piece of the Afikoman. We carry it around, hide it – then search for it. The theme of carrying a broken piece of our heart runs through the Torah and our festivals, even the broken shofar calls of Tishrei. We break a cup under the chuppah and break a dish at our engagements. We break to remember how humble we are, to remember who is King and of the obedience we and the entire world need to have in order to fix . The essence of the Temple and its focus will enable us to release the original tablets from their hidden place as each one of us mend our broken hearts in the rejoicing of the House of Hashem.

Isaiah: “Because My House will be called the house of prayer for all nations”.