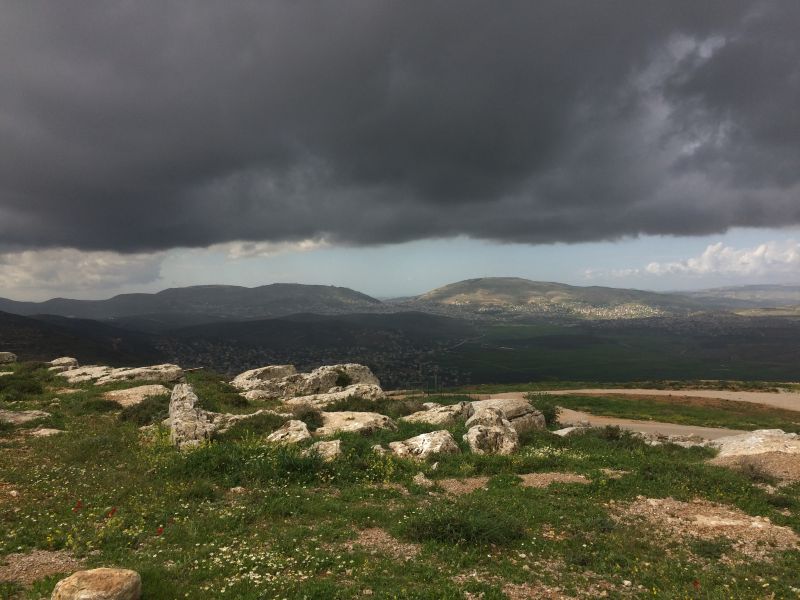 “V’haya ki tavo el Haaretz” (When you come into the Land) (Dvarim 26:1) Our parsha focuses on layers of time, about recalling deliverance from the bondage of Egypt, the journey of wandering the desert, that domain of emptiness where nothing was accessible and nothing was needed, nursing Divine inspiration all the way, not having to cook or prepare food, not having to change a garment or worry about anything, culminating in the final destination revealed now in Ki Tavo -a new identity as the gates of Eretz Yisrael opened like a curtain on stage – the props-  the Mountain of the Blessing, the Mountain of the Curse. Walking 60 kilometers from the Jordan to these mountains, to the Land of Shechem, a place our forefathers purchased at the dawn of Judaism. Am Yisrael are positioned on the scales of the Gerizzim and Eval, the blessings and curses are read. Now it was time to actualize G-d’s plan. With beating hearts and a flurry of strength and animation, Israel embarked on settling down. It took several hundred years to bring the first fruits to the Holy Temple in Jerusalem finally built. Remembering our humble beginnings as Abraham first came here, Yaakov bought a field here and deliverance from Egypt seared into us from day one, right here at these mountains, the place we transitioned into the life force that Israel is, was and will be one day. The blessing and the curse.

There are times that Divine appointment touches you literally like it does right at this moment as I look out my living room window to the stage in front of me at this early hour of an end of August day. The sun just rising from the east behind lights up the sky and shines upon those translucent low clouds hovering over the valley of Shechem. This is an hour of precision as this portion comes to greet me literally. For me, so many memories of our times in this backyard, trips to shop in Shechem, visits to the Tomb of Yosef, leaving our car doors open without a care in the world. But then drama began, the tragedy of foreign governments deciding to start “peace”, opening the door to terror. The hostile environment had Israeli soldiers evacuating and abandoning our holy sites. We were told, the PLO whether we like it or not are in charge now. We must acquiesce. Fear, alarm, dread and later horror were a daily portion of our lives and many a time as I opened my curtain here I asked G-d- “What gives! Are we blessed or are we cursed!” But what killed me the most was the notion that WE were the obstacle to peace. It didn’t take long that the pull out in Gaza and the north Shomron had Hamahs terrorists calling the shots as they sent missiles into Israel from the once lush green houses of Gush Katif. When you vacate good, don’t expect it not to fill up with evil. You know those calls to defund police? Ever see a riot in Portland? They say if the terrorists “make good” on their commitments then people in Kabul will be safe. The rapid fall of Afghanistan is the paradigm of the Oslo accords. Portland, Chicago, all chaos everywhere. The insurgents have become the established authority. We have enabled evil, hanging on a sick hope that the Taliban and Hamas will keep their word.

By the time thousands of Israeli citizens were murdered, as law and order were burnt bombed and shot out of the heartland of this tiny country we had been clawing at clumps of earth here, trying to secure as large as possible an enclave of a terror free area. Some of the most important lessons in life I learned on my own skin from the ancient template I’m looking at right now, a place I can see but I can’t touch, the blessing and the curse. We have given our first fruits. We treasure life and our right. The endurance that Hashem has enabled in this story is the blessing in this curse. The faith is what keeps the light entering our splintered and broken lives. Blessings and curses we in essence bring upon ourselves. There is free choice. There is no greater curse than to be alive and not live truth and justice. This portion is positioned precisely at the time we need to hear it, close to the Day of Judgement as we begin a new cycle in our lives, a time we must choose what will bless us- what will curse us. Hashem’s enduring love and vigilant watch and promise to carry us on eagles’ wings has been nothing short of a miracle. The fact is- the primordial covenant lives eternally on despite the tests along the way and how the generations have fallen away from who we really are. The peace you feel here in our garden you can cut with a knife. But the other side is just over the fence. We don’t have the privilege of an ocean that separates us from it. Deliver us from the bondage of Egypt! Take us out of the desert! The capacity for change and the much needed transformative enforcement starts here in the beating heart. Once we recognize how far we have fallen from our ideal selves and move to reclaim the majestic potential of who we are, can we begin to repair. Teshuva Tefilla Tzeddakah is now. It’s time to settle down.

This is the time we would like to thank all of you dear friends for your love and support. It’s also a good time to bring new friends into Friends of Itamar our 501c3 assisting in life giving projects here on Itamar in the heartland of Israel.