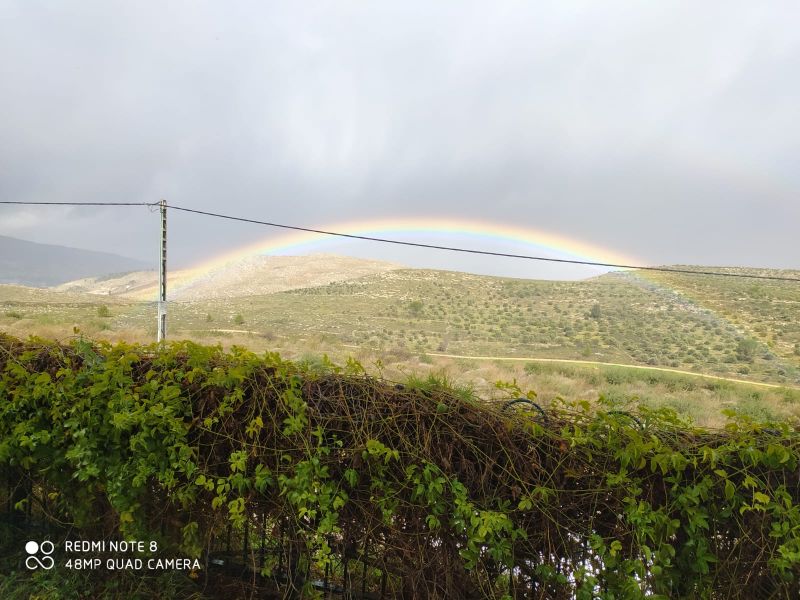 My life is like a movie. It pulses down and up rapidly- like the monitor of a beating heart, my beating heart. Down and up down and up it goes as I feel the fresh winter air enter into the veins of our tree, there above the dripping frozen drops on its stark branches, I can make out a full rainbow in the sky. There are times Hashem literally speaks to me, but only when I can tune out the static.” Bo-ee” He says. Come.

There are times that darkness and light appear at the same time. This is what Bo is all about. Our parsha sees the Bnei Yisrael no longer bound in the shackles of their minds, no more foreign influence to govern them. After ten heartbeats of hopes and prayers dashed and reignited, they were finally enabled perception without static- knowing darkness and light ,two separate and opposite features always exist simultaneously. This is no magic. The Egyptians saw nothing because they banished the light, denying G-d while the Bnei Yisrael acquired the ability to be in communion with Hashem as they rose from the sidelines joining Moshe in active participation in their own exodus. Until the tenth and final plague they were only spectators. Our Rabbis bring down a critical concept on this phenomenon – Heaven and Hell are also in the same place at the same time. It’s up to you to decide where you are and what you are going to do when you get there. We went to Egypt but were only delivered up and out of there when we acted upon it.

Redemption is not a Cecil B Demille film. We’re not watching it from a bench or a couch or from bed holding the TV remote. Hoping for Mashiach is a small part of it. People have been asking me about current events. We are being inundated with static and doubt. I say, don’t be a spectator – be a participant. How much more do you want to watch and wait? We must return to the Covenant as He returns to it. The redemption requires you to walk through a land unsown after Him. I live in the doorpost of this Land. It has been such a struggle! I have seen it bloodied. It has known death and we have known dread fear fright panic and trepidation. We have known our own brothers to listen only to static, to Hollywood. At the same time this place is labeled into rebranded words like west bank, territories, area a b and c- let me clarify now – this doorpost is the portal to His everlasting covenant. It knows life. Our baby grand daughters were born this week- a wonderful distraction from hard news. The first pictures of them impressed me with the bloodiness of birth and brought to mind the passuk of Ezekiel 16/6 as he prophesizes about the final exodus: “And I saw you struggling in your own blood and I said to you in your blood LIVE and I said YES to you in your blood LIVE.” The rainbow shines as a reminder of HIS COVENANT. This is the formula and with this staff you will pass through the Jordan. “Bo” Hashem calls to us. It’s not somewhere over the rainbow.