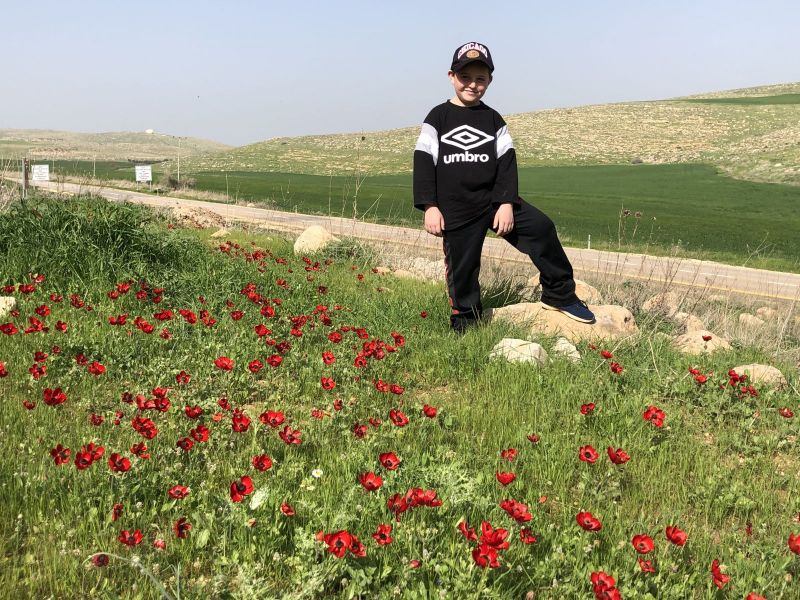 During the long summer days before our third baby was born, I lay immobile, staring at the unchanging blue sky with a bad case of morning sickness. We planted a small patch of grass behind our prefab and there I lay all summer long. The trees weren’t even tall enough at this point to provide shade so the kiddy pool was set up for our two toddlers just where the side of the house created an afternoon screen from the sun. We had our meals outdoors and spent most of our waking hours there that summer. The air seemed to remain at a standstill, the heat rising. The nights were obscurely black. It was unnaturally quiet. – Then came the storm. Iraq invaded Kuwait and repercussions were about to hit, the newspapers speculated. Sadaam Hussein had been threatening Israel for months, saying that war would not end until Israel had given up all its land. Later, we were to witness that he did not differentiate between any part of Israel. There were few people that doubted his capabilities in shooting chemical weapons into Israel. The tension was mounting along with my mounting abdomen. By the time the weather had gotten cold, people were taping up the windows, getting their gas masks ready and little gas protective baby cribs. People were getting their sealed rooms ready. Willingly I entered our home off the grass that turned yellow and just in time as the dry wind made it impossible to sit outside. On January 15th 1991 the United States led an attack on Iraq, backed by a 28-state coalition which consisted of Arab countries too. The war broke out- “Operation Desert Storm”. Iraq bombed Saudi Arabia and Israel. The clouds of war were dark and heavy despite it being dry beyond words, the driest winter ever.

We could have been worse here on Itamar. Located on the mountain range far from city centers, we doubted if we would be targeted. Most Israelis lived in the low lands and the feeling was a grave prediction for those places; that chemical warheads were intended to explode into them. Israel had complied with the US request not to play an active role in this war. (This mantra later repeated itself sadly when it agreed to step off and not bomb terrorists that lived no more than meters from Jewish settlements as Oslo was implemented some years later- a GRAVE mistake that took the lives of hundreds of Israelis). Consequently, the 39 missiles fired into Israel all traveled directly over heads. We had an old friend that lived on our roof part of that winter, taking photos. He would wait, evading asleep, for the perfect picture of the sparkling warhead. The sirens reverberated and the voice of my neighbor, Gilad Zar (who was years later murdered by Palestinian police- man) would call calmly into the loudspeaker- “Enter the sealed room”. Moshe would put on his elephant mask and shuffle the kids into the sealed room. I was in no mood for a masquerade. Pop! My water broke- it was time to get someone else for the loudspeaker- Gilad had always been my faithful ambulance driver. No one was going to take away that privilege, not even Saddam Hussein!

Merav Tirtzah was born as sirens rang. It began to rain and rain after a long drought. It was late February. We went to the famous “shuk” in Jerusalem after being discharged from the hospital and bought costumes and treats for the upcoming holiday of Purim. There was tension in the air, of an enemy that remained unseen, ready to attack any moment. The children were ecstatic on our arrival home, loving their Purim costumes and trying them on with the enthusiasm that toddlers have about everything, especially celebrations! They were thrilled with their new baby sister. Although it was considered a war, I never really internalized it maybe because I wasn’t a bit afraid. Things took a turn around as they do precisely on Purim and Purim ended the war that day. Fortunately, there was very little loss of life but over 3,500 homes were damaged in the populated Gush Dan area. It seemed surreal to pull off the masking tape from the window frames and store away the gas masks. The house was a wreck, with friends and neighbors dancing enraptured into it with lots of goodies, loud trance music replaced dismal messages on the loudspeaker. Reading from the megillah in our tiny synagogue, the kahahl (congregation) broke out with deafening noise every time the name of Haman came up. A strong smell of firecrackers hung in the air. It was hard to breathe. Not only did we pull the tape off, the frame of life was taken off that day. Eventually, not too long later, Sadaam, that Haman was hung.

Our experience with war has prepared us for today, for the enemy virus that hit Israel on Purim 2020. Our family has taken on a new tradition for the last couple of years leaving the hullabaloo of the chaos of Purim after megillah reading for the tall grass of the Jordan Valley. This year we met a flock of cows that seemed to keep coming from inside a crevice in one of the many low hills sloping down. As the peace of it met us like a breath of fresh air, chaos began to descend on the media outlets. On the Jewish cycle of the calendar, Purim is the last holiday of the year, and it was also one of last days we shared as a family. It seems a longer time away, but it’s only almost two weeks later. We feel secure in the way our government as dysfunctional as it may appear today (we actually do not even have a formal government yet)- is dealing with efficiently in every realm of Israeli life. The last thing I did before everything became shuttered down was shooting practice at the range in Ariel. My license to carry arms requires it. It had me standing and actually forcing me to feel balanced and on target, strong. It made me pull myself together. More. Here on Itamar, we are braving the storm. Moshe is unloading a truck of grape juice preparing for our yearly Pesach food gmach. The DOW and oil are way down but chesed (kindness) remains a top priority. The vessel must be full always and then emptied for the needy and the needy have grown exponentially. (PLEASE GIVE.) The weather has been especially wintry. The streams and lakes are all full to the brim. People would normally be emptying their worldly possessions into their backyards as they scrub down preparing for Passover. They would also be normally be speaking to one another, praying together, connecting. Hashem in this case doesn’t want us to leave indoor living yet. We are having an intimate moment with the people closest to us only now.  Just some more time like this as we prepare for order. We are contracting. It’s more silent now. We’re learning to live with less. We’re getting ready to put a frame on – the Pesach seder plate reminds us- everything has a place and a time.

Buds appear on the rosebushes outside my windowpane. If you would walk through the mud to reach my street through the dead-end that has been beautified by Gilad’s widow with countless flower pots you would see a candle glimmering on our table providing a delicious scent of fresh cotton and a cheerful light. The Land is being blessed. Our gardens are about to burst with the promise of the buds of first Spring. The anemones decorate the green hills as the horses and sheep graze happily seeming oblivious to the cold relentless rain. The fields are calling- “Come and claim me”. We are about to enter the time of matrimony. Here, we are getting ready to unite with the Land as we prepare for the next stage of history.

Hashem is indeed taking us into a new phase of history! We have an unseen enemy, a virus. It explodes like chemical missiles into populations. People are forced into new conditions that will actually help them re- evaluate their lives, religious, not religious, progressive, conservative, atheist and believer. It is time to make order. It is time to circumcise our hearts. We are about to cross the Jordan and enter the Land.