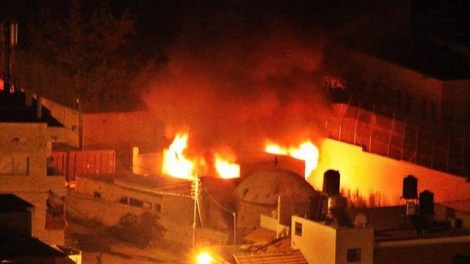 I woke up this morning to an acrid smell of smoke and fire. The shootings and screams are a nightly occurance- you hear them as the wind blows their echoes but you also learn to screen it out as you learn to screen out tumah. The smoke too is not uncommon- it’s what they love to do- burn.
But they did not by chance choose to burn down Yosef. Yosef is the one who had a dream and his brothers did not believe in that dream. It actually so annoyed them that they conspired to thro…w him in a pit. Later, after his dreams come true and he is collecting his brothers and sustaining them, blessing them- he is the first item on the list of things to do when entering the Land after the Exodus. His bones are layed to rest. Just like no other person is called the Tzaddik but Yosef- no other person’s bones are layed to rest- just Yosef. Yosef is the foundation upon which all is built, the backbone of this Land. The fresh produce, the productive again soil, the supermarkets filled to the brim of KOL TOV (all goodness), the buildings going up at a matrix rate, the high tech and the now oil found in many places in this land. It is a coming together of a mixed multitude of Jews coming and returning in droves to their ancestral Land. In the subconsious mind of the adversary Yosef is attacked time and again in an effort to quell this growth, to burn it down- to stop it. In vain.
The people that live here in these areas of Yosef, In Itamar and her surrounding communities have felt like Yosef when we went looking for our brothers, as Yosef did when he came here and said , “Et Achay Anochi Mivakesh!” when hundreds of our friends were murdered after the first burning down of Yosef in the year of Oslo Peace- 2000. WE call for peace- they call for death and our own brothers shook hands with the devil, turned their backs on us. Major Jewish organizations turned their backs on us when we went to speak and plead because we were not politically correct. When the bones of Yosef were put to rest almost at the very spot he was sold, all the tribes of Israel were collected there and “Shechem Echad al ACHECHA” a new call for unity was established in that place. This is a time we turn to our brothers again- a wake up call AGAIN to ask – please recognize us and our dreams- please help them come true.
Yosef represents perseverance steadfastness, rooted into the groud, unwavering. We will never turn our backs on this place, the heart of Israel. UJA, JNF, WZO- all of you! STOP HIMMING AND HAWING! Stop backing down! There is only one Israel- the only place where there is a Jewish army fighting for Jewish rights! You are all in a temporary place! Stop straddling the fence! redefine your missions! Please- we call to you to stand united as watchmen on the walls!
Shabbat Shalom, Leah Goldsmith