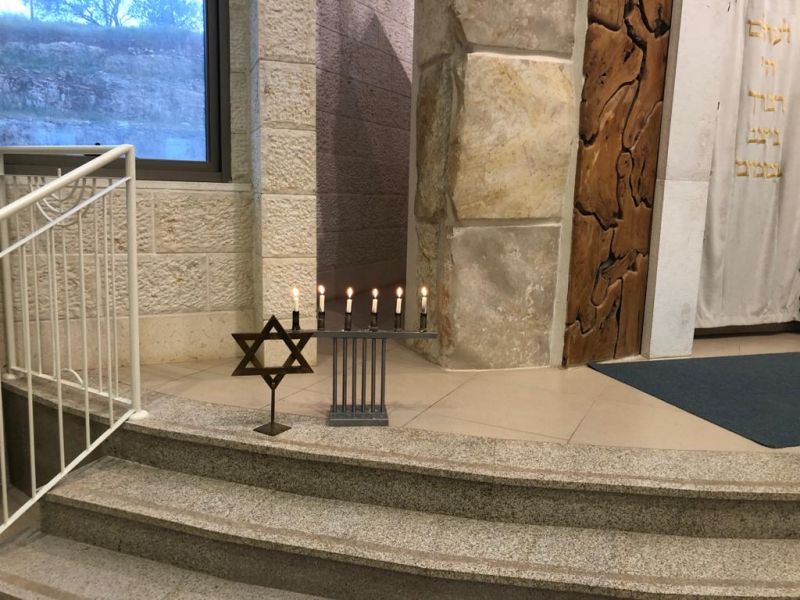 Our grasp of history usually hits home from how it touches upon the present time and enables us to perceive our not taken for granted lives now. In Israel all the more so, this phase of time we live in right now in that we are part of a developing story unfolding word for word in visions our prophets foretold thousands of years ago. I ask myself how my murdered aunts, uncles, grandparents would have felt standing on the precipice looking into the wondrous changes that turned night to dawn, reality of death blood and no hint of humanity into a blossoming garden of promise would have them at peace. I take solace. Their blood is avenged in the life in the living Land. Our perspective of the holocaust here is far different than those living abroad. For us it is a bloody history that gave birth to our sovereignty. The picture before you is a menorah and Magen David made for the specific task of remembering the holocaust by my dear father zt”l who lost everyone dear to him, a sole survivor. The menorah stands in our synagogue here on Itamar, that here too we lost so many, too many precious souls, innocent victims of heinous acts of terrorism that came to settle our homeland, Jews zealous for Zion, gentle amazing people, each one. We gather in this synagogue to pray and to remember them. The people that continued on here with the same resilience my father gathered and overcame- together, we share the same destiny plowing forward to bring new life in hard times. Today we remember all victims.

I don’t know how it happened as the only branch of my father’s tree to do it, but we found ourselves returning to the heart of Israel, stepping upon her ancient stones, where Abraham and Yosef literally walked but at the same time the world called us the trespassers. It resounded with most people, Jews included. We became the oppressors; we were likened to Nazis. The delusion of Oslo worked. Slowly, slowly, the drug injected made a schism between those that live here and those who oppose it. The old theme of Jews acquiescing in their thirst to fit in continued. It didn’t matter that Berlin was proven not to be the New Jerusalem; Oslo became the magical entry into world acceptance. Oslo questioned our ethical behavior while setting guidelines for our destruction, for arch terrorists to lead and to actually pay for our slay, training enemy armies just a stone’s throw from our home, with your tax payer dollars. The Nazis occupied- we became the occupiers. Antatevkah became Gush Katif and the heart of Israel became a tainted word. Jews were ok to live in the Pale of settlement, Tel Aviv and her environs, that thin strip of an eight miles wide ghetto. People were slaughtered by the hundreds in Judea and Samaria, but Oslo became a holy word; scud missiles and later grad missiles fell on the southern and northern borders. The illusion of peace couldn’t be further from the truth. I don’t need Arnold Schwarzenegger to lecture me about Crystal Nacht. Since when did Hollywood decide truth.

We are counting the Omer now. This is the special time between leaving Egypt and receiving the Torah. Lots of husks have to fall off before we can claim the Land and live in it in peace. The dry holocaust bones are rattling now and making a great noise as Jordan collapses and Syria, a ruin. No amount of cremations can cancel the next phase of history as the dry holocaust bones are being gathered. No amount of Oslo or Hollywood can cancel the future. This is a time to say no more victims. No more replacement theology. No more exile induced thinking. On Holocaust Day we plant a vineyard here in His living Land. Join us.

“Then said he unto me: Prophesy unto the breath, prophecy, son of man and say- “Thus say the Lord Hashem, come from the four winds, o breath and breathe upon these slain that they may live!”