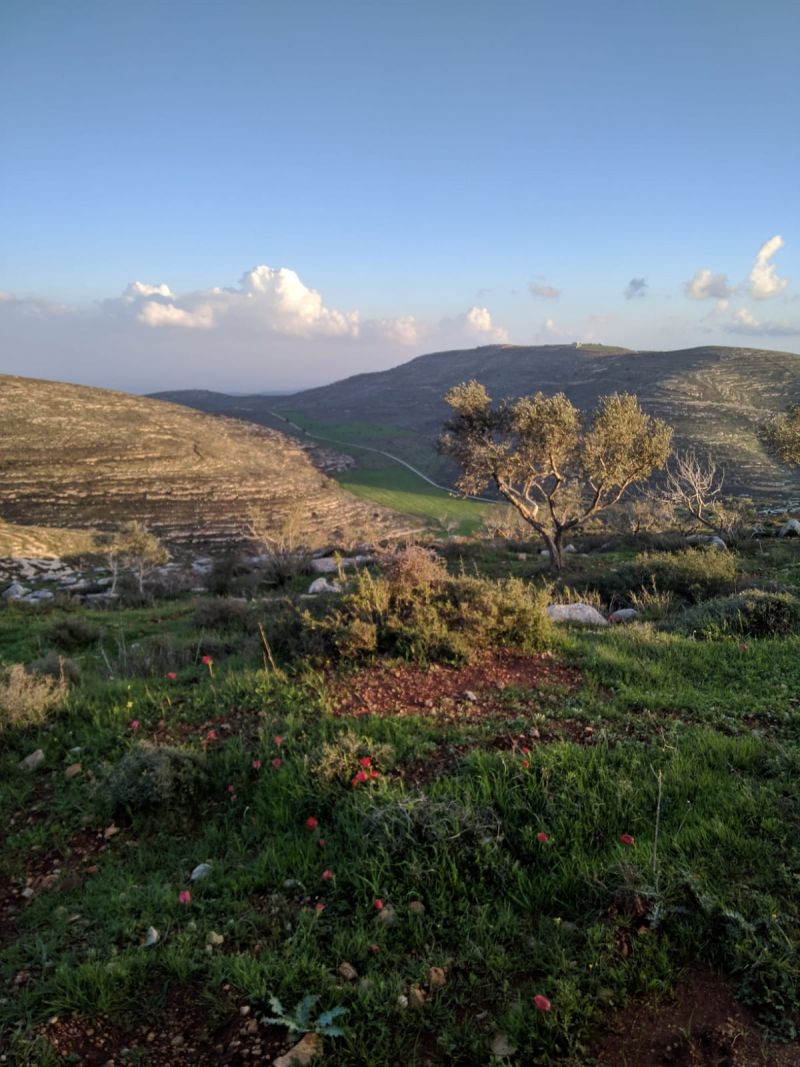 Tu Bshvat 2020 Back in the mid- eighties we barely had our feet on the ground here. A little dirt road led into Itamar and the winters were freezing cold. Heating the ten little prefabs were in itself a project; one generator was all we had for all the families that ventured out here beyond the “dark mountains” as most of Israelis called it. It didn’t always work and I would rock our first born baby bundled snug in blankets, sitting out the storm to the ambience of amber candles, my first luxury. The first real snow we experienced here, a whiteout, had us in a perpetual blackout. After the snow had cleared and winds died down, we ventured out to the highway which led us straight to Petach Tikva where business went on as usual ,people going about their day in the much warmer sun. It was eye opening for me as well as for them, the look on their faces as our car parked and they halted, staring at the snow piled up on it. “Where did you come from, Alaska?”, they asked and I tried to explain “no, not exactly- were just up those mountains” that you could make out in the distance, east. “Don’t people here know the geography of their own tiny country?” I asked my husband. I later knew they for the most part, did not. It was in those early days that we saw the pressing mission of connecting all parts of Israel to its heartland, because the fixing of anything starts at home. It was time to put the pieces together. The puzzle still had many missing bits and portions. It later became even more challenging as a force came to label the pioneers as obstacles to the peace process. We held out though and as time went on and we grew and flourished, they saw we did not have horns. There were always new obstacles placed before us but the walls that separated the different segments of Israeli society began to come down. Slowly, slowly, like the dawn, people began warming up to the idea that we had their backs here. It became a new day. They learned that the mountain range that ran right through the center of the country actually had us at a strategic advantage and that better for us to be here than Chamas and Fatah. But we had something also historically and spiritually so rich, the secret of the magical natural setting with breathtaking views and important lessons about our identity, the new one and the old one, it was all here, waiting to be discovered. Revelation came to many as the pieces came to click together to give the full picture. Aside from putting our ideology of educating the next generation and building schools that taught about Israel that took the feet and hearts of hundreds and thousands of students through Israel on hiking it tasting it and experiencing it, another credo came up alongside the academic structures we built and succeeded in in an amazing way- agriculture. It was time for Tikkun Olam as we realized looking around that we returned to the Garden of Eden but that we had to plant it. The millions of rocks and boulders were cleared, the earth was raked, and the vision became alive. Petach Tikva and other cities became connected as organic farmers here in Itamar forged relationships with real life organic earth to table produce grown right here in the heartland and voted unanimously as excellent by the most liberal and even left oriented consumers. Busloads of curious organic food mavens began to come out here and discover the mountains had turned from dark to green and to taste its wine and cheese. The entire terrain transformed as it awoke from a long, long sleep of two thousand years. People were thirsty for connecting with the earth and rumple with the sheep dogs as their children went to milk the goats. As Israel becomes more and more cemented in and cities grow and become congested in urban madness, the yearning for the earth grows. The job of an organic farmer is not an easy one and the tasks are challenging. Without using chemicals, alternative methods are applied, like organic compost and natural predators. The organic farmer spends many may extra hours of the day checking but not interfering with nature and the environment. The objective is to develop and promote the values of protecting our environment and have our food grown in an ethical way that also considers who and where this food was grown. Oh my Gosh- its grown right here! In the heartland! What a testimony of restoration! I was asked by so many people what my feelings are on the “Deal of the Century”. I’ve been hinting to it in my recent blogs but hopefully the message here is loud and clear. Our mission is to be a bridge to the world to be a light of universal Tikkun Olam. That cannot be done until terminologies like “isolated settlements” becomes obsolete. The power of a united Israel in all realms of the meaning of that word comes first. Shechem Echad. We know just how integral Friends of Itamar has been in making this dream come true. Please consider this Tu Bshvat the farmers that we support through snowstorms, arson, theft and all the natural and man -made disasters that they face on a daily basis. We are planting trees as we do every year. If you choose to plant one or more here please earmark so on your kind donation. TU BSHVAT sameyach with blessings from the Land, Leah