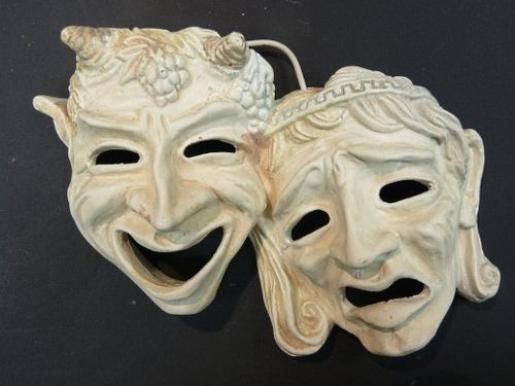 I can just make out from the view down the western slopes of Mount Gerizzim an impressive building from the past that peeks out above the heavily populated city of Shechem, a Greek hippodrome from days of old. The acoustics here are one of a kind, like shouting into a barrel, I’m sure whoever is on Mount Eval can hear me loud and clear. Way, way, back in primordial days it was the first stop of Avraham, and later the scene of the famous Land Covenant when six tribes stood on this mountain, and six on the other, the Blessing and the Curse. Towards the end of Israel’s powerful sovereignty, the Greeks renamed the city Neapolis meaning “New City” around the time- frame of Chanukah (2nd century BCE). Infusing Israel with a foreign culture, the hippodrome was built for the tragoidias, Greek tragedy performances. The intention of the Greek tragedy was actually a form of enacted idol worship that invoked an accompanying catharsis- like pain that awakened (in their eyes), pleasure for the audience. Their dramas were built upon human suffering, terrible events and sorrow. Whether epic or lyric, comedy or calamity, the content of these plays so negated the morals of the Torah of Israel, that they can actually be categorized as the Torah’s antithesis. On top of that, the Greeks forbade the teaching of Torah under penalty of death. The hippodrome hosted a plethora of events such as gladiators that fought to the death, parades of phallic processions, or dance dramas that told stories of half man- half wild horse, centaurs performing for 20,000 people at a time, enactments of abominations. Man and beast met there in the thrill of Greek culture as all was made sure to entertain and influence through the element of tragedy, with an emphasis placed on the embodiment of the untamed nature of man. Ekkyklema, a hidden element of the story, rolled out butchered bodies to be displayed, the featured character that died a gruesome death. All of this for the dramatic effect of sex and violence. In essence, the whole goal of Greek culture was to impregnate and INVEST in the essence of Tumah, defilement, and impurity as a way of life. They were so successful that when the Greeks capitulated to the Romans who conquered them and the places they ruled, their Greek tragedy influence became adopted and incorporated into the Roman way of life. The hippodrome later became an amphitheater with much of the same. Severe earthquakes that hit Israel through time severely damaged these buildings. And it’s no wonder. They later fell to decay and neglect, long forgotten as the land became desolate, for no nation could make it prosper.

Our Parsha takes us to a tragedy of another kind. Taking place in Shechem, the place of the donkey and the ox; of rape and circumcision- Dina is taken against her will by Prince Shechem Ben Chamor. The donkey of a man tries to placate and speak to her heart. He wanted her by his terms. Shimon and Levi made every male circumcise himself in order to liberate their sister and take her out of there. After the carnage, Yaakov buried the idols under a tree on the western slopes of mount Gerizzim, not far from where hundreds and hundreds of years later, the hippodrome was set up; the ideal setting for death culture. The story of Dina is one of darkness and despair, but like everything in Shechem, it is a story of dichotomy. Unlike the Greek tragedy where there is no happy end, and no moral end, this story of rape takes a full circle as Dina is remembered and gives birth to the future wife of Yosef HaTzaddik (Asnat) who bears him Efrayim and Menashe that inherit the tribal territory of Shechem. Doubly proclaiming the Land Covenant on the mountains of the blessings and the curses, the tribes would later sing with Joshua, “Who will be blessed?” Those that keep the Torah. “Who will be cursed?” Those that do not. Let’s take it down the line. When nations seek to rape us and call the shots according to their terms, when the sun shines and sparkles on the eye tooth of a prince who claims to love you, Israel, yet takes you and turns you into a tragedy, it means now is the time to protect the honor of our sister. At this time of darkness, even now in Shechem as I can barely reach her, a light shines in the dark. It’s the real end of the tragedy. In this complete story, Esau and the donkey are throughout history trying to end it in a tragic way. HOWEVER, HASHEM HAD IT OTHERWISE! The last part of this trilogy is the State of Israel born out of the ashes of the holocaust, the rebirth in the desolation, the return to her dust and earth in the world obsessed view of her wearing vibrancy and brilliance, innovation and motivation: the oxen overcoming the donkey. Stubborn people, stubborn for Hashem. Now is the time for every nation and every individual to choose between the Blessing and the Curse. The time is ripe for a good ending. “And I remembered My covenant with Yaakov, and Yitzchak and Avraham. I remember and the Land will remember.” The story of the Jewish people and Israel is the best show in town.