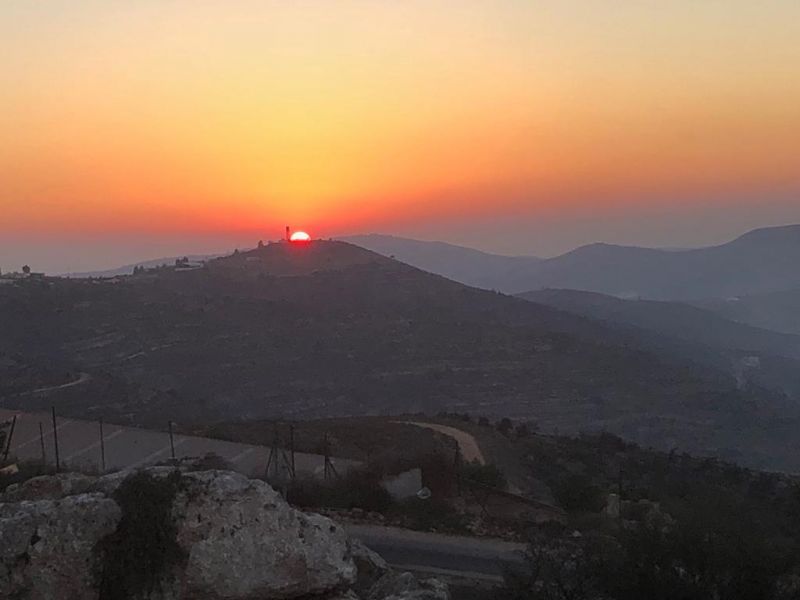 Way before I met and knew Shakid, and our other Pashtun brothers, I thought I knew everything about Yosef HaTzaddik. Joseph’s tomb site was once a secure attachment for us. Like sitting in the eye of a tornado, the little Yeshiva there served as a sheltered city of refuge in a city of refuge. (Later it would be an unprotected prisoner). Hoo- boy, I thought- welcome to the living Torah. The complex felt as comforting as inside a genii bottle. Some of the inner walls were painted jade green, some white. Her finery, the numerous holy books sitting on little built in chambers on the walls gleamed gold in the dim light that shone from brass lanterns that hung from the domed ceiling. There were always candles burning cheerfully on a tray on the table, a warm yellow light. A partition ran right down the middle of the room, including the actual monument of the protruding tombstone covered with a dark blue velvet parochet. There was that zimzoom of prayers like the buzzing of bees, an emotional wave that lit our collective memories. “Yosef! Ode Yosef Chai!”, lots of ecstatic singing went on there, and dancing. We felt him there. For me it was as if I had been born and raised in this place, so familiar it seemed. I perched myself always at the little window that viewed into the courtyard’s one famous big and shady mulberry tree, surrounded by polished cobblestones. At Kever Yosef ancient things still lived. Yosef still lived here. You felt it. What got me here? Did I choose this life or was it predestined? I often wondered. It was ten years prior to my moving to Israel, that I saw – somewhere, somehow the image of the first FEW pioneers that ventured into the Shomron. They demanded the full return to her, the ones that walked tens of kilometers and stood in the pouring rain at Sebastia holding Chanukah candles in the freezing wind against the backdrop of complete darkness and more blackened hills and mountains. It burned into me, and called to me when I was just 12 years old far, far away. A tiny little light at the end of the long dark tunnel of thousands of years awakened a spark in me, awakening my hope.

The years Ya’akov Avinu waited in expectation and longing are compared to the anxious craving we have for redemption. Some may say wishful thinking, I desire to share this testimony, our biblical mandate. What goes around comes around. Yaakov was watching and waiting. He remembered Yosef’s dreams. “So his brothers envied him, but his father awaited the matter”. (Vayeshev 37-11)- “ויקנאו בו אחיו ואביו שמר את הדבר”. Yosef was left in the pit and the jail, twice forgotten yet his father remembered. When Menashe his first-born son was born, he called him מנשה so that he should never be forgotten. We remove the tendon from our meat, – גיד הנשהto never forget. On Chanukah we light to remember the few brave hearts that reignited the light of the Temple. This is time we remember the few in the hands of the many. This has always been the ratio. We were banished from our Land and few survived but we made it home. Yosef, like a ner tamid– standing upright was the one who saved his brothers. Now that we are living on the land of Efrayim and Menashe, we have a biblical mandate to take the candle into and beyond the dark mountains of the Sambatyon. Shakid and others living in Afghanistan, Pakistan and even China await their deliverance. Josephus wrote two thousand years ago, “The ten lost tribes are beyond the Euphrates and are an immense multitude not to be estimated in numbers.” We know that just like a day is followed by darkness, the light later returns. Hashem will take them out of their darkness. Let’s start with a few. It’s up to us. This is the hope of Israel. It is not by chance that Chanukah and the stories of Yosef always intertwine. Yehudah ultimately redeemed Yosef as he took mutual responsibility for him. Now it’s up to us, the Yehudim to redeem Yosef. Chanukah Sameyach- Shabbat Shalom, Leah