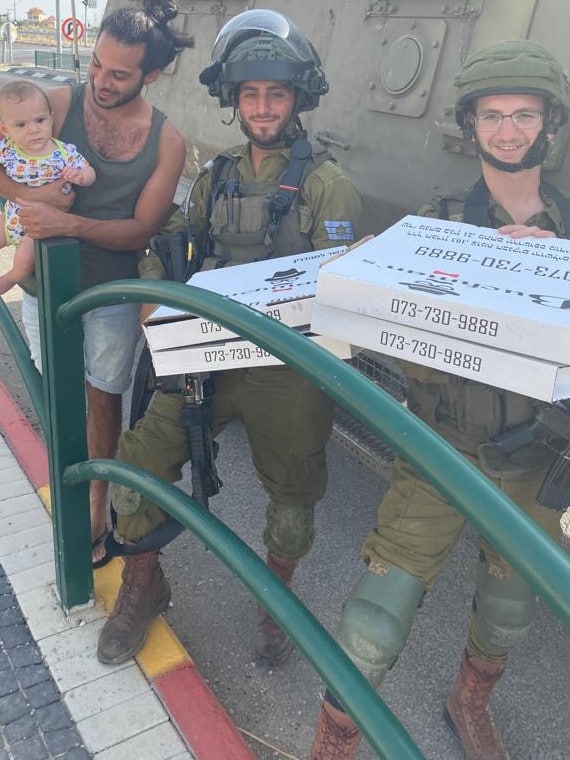 Some of you on your journey through Israel may have passed Tapuach Junction, probably to visit Gav Hahar just north of the juncture. A critical connecting point of west and east, north to south, it serves as the middle crux on the axis of Israel, the poopick we call it meaning bellybutton. Not far from here a more biblical term applies to this area, תבור הארץ, literally: the umbilical. Trucks of produce from Jordan cross the Allenby Bridge riding through Tapuach Junction west, farmers of the Jordan Valley returning home east from a day in Tel Aviv, a distance of 75 kilometers. Yes, that is the waistline of Israel! Today I will be passing it, going south for a day in Jerusalem as I did yesterday on a trip to Ariel. Hitchhikers decorate it, women with big colored head scarves, boys with big backpacks coming to stay the week on Itamar at Yeshiva, soldiers with big guns in their olive gear to the backdrop of olive groves. For Gav Hahar people, it’s the only way out. Every now and then, a regular occurrence of stabbing of Jews or shooting at us happens here, but life seems to go on miraculously despite these numerous terror attempts and attacks. It’s just a way of life- surreal but real. Just recently as you have read on this thread, a Yeshiva boy, Yehudah Guetta HY”D, that learned in our Beit Midrash was murdered here as well as friends from the past like Eveyatar Borofsky HY”D from Yitzhar. Tapuach Junction is the epitome of the map of the Land of Israel because it sits in the heart of the Land of Israel. There are those (most) Israel bashers that declare it “deep in Palestine”, like a mantra. Sure, the closer you get to the HEART the harder the resistance.

People are asking me about the new politics in Israel. I think Evyatar will be the turning point and test for it; Evyatar,a new settlement set up near Tapuach Junction on state survey land as a counter reaction to the soft response of this terror we have to contend with on a daily basis. There are already fifty families living there with seventy more on the waiting list. If Naftalie Bennett can get around and get over the radical left’s agenda of instilling globalist liberalism that in essence opens the gateway to radical jihad takeover, as his very own coalition that has stolen the vote (because most Israelis are right wing ). If he can keep Evyatar on the ground as Netanyahu has kept the tens of thousands of illegal arab building projects going up like mushrooms on the ground as well with zero enforcement; it may prove that despite the coalition with the left, there is a new clear voice saying-: “HEY! THIS IS ISRAEL!”  We are just getting over the recent aggression of thousands of missiles on Israel proper including to Tel Aviv and Petach Tikva. What country in the world would stand for the burning down of ten synagogues and go almost without a word? The closer you get to the heart, the harder the resistance. Israel’s soft response to the takeover of the Negev by Bedouin Mafia tribes with crime up and no enforcement has us asking the same questions you ask- how will this government respond? It’s unheard of that having a flag parade in Jerusalem needs the stamp of approval by Hahmahs, this too is surreal yet very real. Are we strong we ask the crucial question?

As these hurdles need to be made there is at the same time,an overleap of consolation in the Abraham Accords. Just yesterday, a contingent from Bahrain came to learn in the yeshivas of Modiin Illit professing the will of Sunni Arabs to live in peace with their cousins and to solidify a covenant based on love and honor. Refreshing things like these do not come out much in your media I am sure. Rabbi Moshe continues to learn with our Pashtun brothers who have such a thirst to reconnect with their Israelite roots. People from all over the world send encouraging notes that really mean a lot especially at times like these. The world revolves on an even axis of mercy and judgement. We pray to hashem to continue to bless and we supplicate in all of this mix of chesed and din. Hashem’s attributes are so great – we learn so much from them. We should shower down blessings, it’s what makes the world turn. But the vault of balance is what is crucial and the din, the judgement that needs to be applied at times is what gives the unending bounty pouring down its shape. It contracts the blessings into a vessel that contains the good in this world. Our holy Rabbis told us long ago that the mighty warrior who will fight the final war prays in the aspect of judgement and will descend into the throat of the sitra ahchrah (the other side). He does this in order to redeem lost souls that do not know what Tapuach Junction is or means in truth of Israel. He will pray this way until ultimately destroying the entire realm of evil. We need to pray that the other side vomits up all the damaged souls it has swallowed up until at last evil and its life force vomits itself up. When the total truth is revealed, we will know we’re close. In the meantime, there is still so so much to do as we pray. We still really need your help. Please tell a friend about friends of Itamar our 501c3 that is doing its best to keep the heart of Israel alive.