Itamar welcomed the visit of Rabbi Chaim Drukman former Knesset member and founder of the Ohr Etzion Yeshivah. Rabbi Drukman born in 1933 was a student of Rabbi Tzvi Yehidah Kook Ztzl. Rabbi Drukman shared with the community very inspiring Torah teachings. The Rabbi’s visit came at the wake of the memorial of Eliyhu Asheri, his adopted grandson. Eliyahu’s mother Miriam grew up in the home of of Rabbi and Rebetzin Drukman.

This week a memorial service was held on Mt olives for Itamar’s resident Eliyahu Asheri HYD that was kidnapped and murdered the same week Gilad Shalit was kidnapped. Eliyahu’s parents Yitro and Miriam are living on Itamar almost from the beginning. Yitro was born in Australia and found his way to Am Yisrael.  He is both a scribe and Torah scholar. His wife Miriam runs the ritual bath of the Itamar community.

Itamar welcomed the visit of

Craig Goldsmith. Craig a cousin of Itamar’s Mayor and has been a friend of Itamar from the beginning.  Craig got a personal tour of the community by his cousin and could not stop taking pictures of the beautiful surroundings. Believe it or not this was his first trip to Itamar.

This week Itamar’s  yeshivah high School, Chitzim completed the  school year. The last day of school was held at the community of Neve Zuf at the pool. A special barbeque was made and presents were given out to students who received rewards for their excellence. We wish them a happy and safe summer. 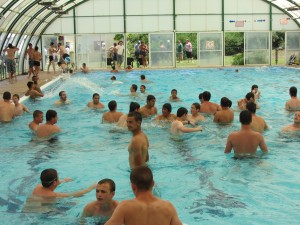 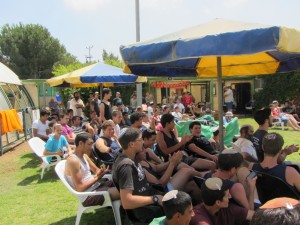 Itamar welcomed a group of tourists that visited our community this week. Most of them were from the USA but there were some representatives of New Zealand as well.  They had a great tour of the community and really enjoyed themselves.

Watch Rabbi Goldsmith’s new Torah lesson on recognizing a miracle when you see one.