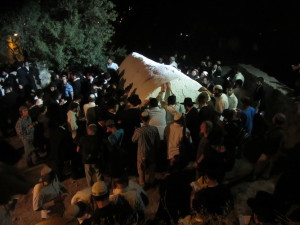 marked the annual entry to the holy Biblical grave-sites of Itamar and Elazar located in the village Awarta near Itamar was held. Unfortunately, because of security concerns the entry is only allowed once a year on the memorial day of Aaron the High Priest. Let us never forget that the murderers of the Fogel family came from this village when they massacred the Fogel family two years ago.  It is hard to fathom that many of our most sacred places are inaccessible to us on a regular basis. Even this once a year entry was done like robbers in the night – at 2:00 in the morning to avoid possible terror attacks. It doesn’t make sense that we can’t visit our holy sites without worrying about being attacked.  Regrettably, we have gotten used to an abnormal reality and must wake up from this stupor. This terrible present day reality should be part of your thoughts during this period as we mourn the destruction of our two Temples. 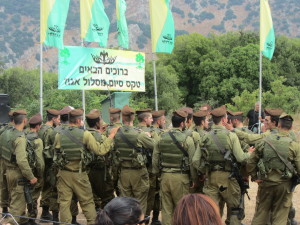 For those who want to know more about this special place- you can read on our website under- torah thoughts- Parshat Devarim 2011 or on Facebook- Itamar Israel support group .

Special Mazal Tov to E. G. on the completion of a long and grueling training period and is now a full-fledged land commando in the Israeli special forces of Egoz. A special Mazal Tov to G. F.  as well, the son of two very special friends of Itamar and grandson of Rabbi Avi Weiss who also completed the commando training . We wish them a lot of success in the future and may Hashem watch over and protect him together with all those special soldiers that are endangering their lives for the safety of the land of Israel and the Jews throughout the world. A very moving completion ceremony was held up north in the Egoz memorial park near the Hermon Mountain. Families were invited to run the last stretch with the soldiers and partake in the ceremony.

Mazal tov to Akiva and Hanna Silvers on the birth of a son.

Mazal Tov to Rabbi Bensi and Mivaseret Rimon on the Bat Mitzvah of their daughter.

The summer forest project of the Itamar campers is really moving along nicely. The campers have already made trails, pruned trees, and made benches and chairs out of mud and cement. We want to extend an invitation to all our friends to come and enjoy a picnic in the Itamar forest.

This week a huge fire was set near our community that was meant to damage our fields and fruit trees. Special thanks to the Itamar first responders and the fire department that acted quickly to prevent what could have been a big tragedy – as the fire could have reached homes as well. This attack is no coincidence as it comes after one of Itamar’s special farmers Barak Melet has harvested spelt for the first time in 2000 years organic spelt that he sowed in the winter