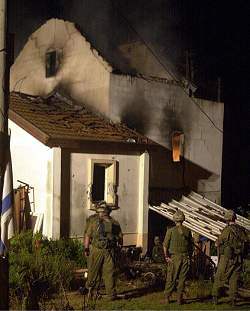 My name is Moshe Goldsmith. I am a rabbi at the yeshiva high school at Itamar and a resident of the settlement of Itamar for the last 17 years. Itamar is named after the son of Aaron the high priest who is buried right down the road, in the middle of a present day Arab village. This grave gives testimony to the Jewish presence from time immemorial in these parts, the very heart of the land of Israel. The settlement faces the two holy mountains of the blessing and the curse, the valley of Shechem houses Joseph the Righteous One.

In the last twelve years we have lost more friends than we can count on two hands and two feet. Joseph was thrown again into a pit and Jacob cries for his loss. None the less, Joseph lives on and only later Jacob recognizes him. We are exactly in the phase before this revelation. We are a hard-necked people and stubborn in our quest to resettle the G-d given earthly covenant. We cleave to the land and the living Torah and hope to unify the people of Israel.

We have faced trials and tribulations, some too terrible to even mention, and suffered much at the hands of Ishmael. I would like to relate to you some of my personal experiences over the last few weeks.

It is a quarter to eleven at night and I am getting ready to go to sleep after an exhausting day. Suddenly I receive a phone call from one of my students. He tells me that he hears shooting right outside his dorm. Hearing shots isn’t something unusual in these parts. I start questioning him ”where are the shots coming from?” (All this of course takes place within seconds) He tells me that they are very close. I tell him to stay in his room and that I’ll be right there. I take my rifle and start making my way to the door of my house. As I put my hand on the door, I hear someone banging to get in. I open the door and about fifteen students come running into my house. They are all panic stricken and afraid to speak. At this point, I realize that something very serious is going on. I tell them to stay put and lock the door behind me. I quickly start making my way towards the school, which is located about 350 meters from my house. I am approaching the basketball court, I notice that a boy is lying on the ground wallowing in his blood. Two men are trying to give him life support. I am asked to identify him. It is a new student who joined our school just the day before. Grabbing hold of myself, I continue running towards the school, which is just down the hill from the basketball court. When I get there, there is tremendous commotion. People are running in every direction. Someone calls out to me and says, “there is the terrorist he has been killed”. I turn around and see something lying dead on the sidewalk that looks like a human being, but of course it can’t be human. What human is capable of committing such an atrocity? At this point, I receive a phone call from the same student that first informed me of the incident. I tell him to stay put and wait until I knock on his door. When I get to him, I find him together with a group other students hiding under their beds. I can’t describe in words the relief that glows on their faces to see a friendly face. While the army continues to search the campus, the staff and I begin to gather all the students in the major Torah study house. I quickly run and get a list of all the pupils and begin taking attendance. Two more students are missing.

Minutes later they are found lying in a pool of blood. The entire night while we teachers and students are sitting together in the Study house crying over our dear ones, former student graduates are coming from all corners of the country to strengthen us. The minute they received word of the terror attack they didn’t hesitate to drive out to Itamar. This expression of brotherhood is living proof that Am Yisrael Chai.

It is now a little more than three weeks later. It is about seven p.m. and I am sitting in my synagogue studying Torah. Someone comes into the synagogue with terrible news. He mentions that there has been a suicide bomb attack in Jerusalem at the French Hill. We all gather together and begin saying Tehilim(Psalms)for the injured. When I come home I receive a phone call from my daughter, she asks me if I heard anything about a student of mine that was injured at the French Hill during the attack. I tell her that I know nothing of the sort and that if something really happened I would have been notified about it. After hanging up with my daughter, I quickly call one of my fellow staff members and gently ask him if he heard anything. He mentions that as far as he knows everything is o.k. A half an hour passes by and the terrible word – another one of our students has been murdered, Shmuel Yerushalmi.

The next day, Thursday, I am in Shilo at Shmuel’s funeral session. We are all standing outside listening to the eulogies and crying over what is being said. I look ahead and notice my dear student, Neria Shabo, holding on to a fellow classmate and crying hysterically. Little does he know that in just a few hours he will be joining Shmuel and many others. I turn to my right and see my dear friend Yoseph Twito holding a baby. A women standing next to him was having a little difficulty holding her baby in the hot sun. Yoseph came to her aid. Little does he know that in a few hours, he will again come to the aid of others…

A few hours later in Itamar I am standing outside my house with my son Ephraim helping him prepare a barbecue for supper. All of a sudden I hear Ta Ta Ta. Could it be shots? No,someone is using a hammer. Then my other son Yoseph Israel appears, minutes before he finished playing for the last time, with a good friend Tzvika Shabo. Again I hear Ta Ta Ta. My son yells out to me Abba someone is shooting. I tell Yoseph Israel to take all the children into the house and lock the door. Don’t worry I’ll be back! Go home! Lock the doors! The children screaming and crying are running after me. Finally Yoseph Israel succeeds in getting everyone into the house. A take my rifle, that hasn’t left my side for months, and start running in the direction of the shots. I make it to the Shabo house and find five of my friends crouched behind a metal garbage container just outside the house. They fill me in- “ Yoseph reported that shots were fired near the Shabo house”. Where is Yoseph? We all start calling aloud Yoseph!, Yoseph!, Yoseph!. He doesn’t respond. Where could he be? He was just here a minute ago. Let’s get a closer look! You take cover we are running ahead. Look! Yoseph has been shot! He has a head injury. Glancing through the window, someone shouts, there are people wounded in the house! The army arrives with help. Shots are fired in all directions. The terrorist is still in the house.

Here I am an hour later staring at the house as it goes up in flames. 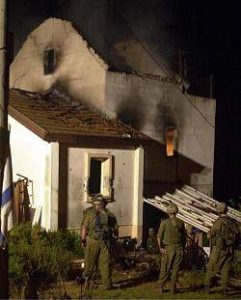 I am crying over the innocent victims but I’m also smiling. Either this monster will be burnt alive or shot as he attempts to run away. Then it all comes to an end – it jumps out the window and is shot attempting to escape.

It is Friday at 12:00 o’ clock. Again I am staring at the Shabo house. It is now known as the burnt house. This time there are thousands staring at the house. We are waiting for Yoseph Twito, Rachel and three of her children. It is time to say goodbye. They must get to their final resting-place.

It is 1:30 thousands of us are in the graveyard. We are staring at Meir’s tomb, the only tomb on the site. Meir was murderedabout 9 months ago right outside Itamar. We were hoping that Meir wouldn’t mind being bored for a while. I guess we were wrong. Yoseph, Rachel, and her children were laid to rest beside him. The testimony of our presence goes on.

One of the greatest Jewish saints of all time, the Ramchal, writes – The time will come when the Jewish people will rejoice in a happiness that will be so great, it will be greater than all the suffering we have endured throughout history. Those that have seen the pictures of the mounds and mounds of Jewish bones, the charred remains of the holocaust, can only feel the electrifying words of Yechezkial the prophet. (Chapter 36-37) The coming together of the dry bones, this very heap of bones had grown into a nation returning to her Land. A hundred years ago the first settlers had to deal with the murderous Arabs, and terrible natural disasters such as earthquakes, pestilence, plagues, and lack of basic food. They set the backbone, the very foundation of a homeland for the dry bones that arrived 50 years later and had nothing but pain, trials and tribulations. But the Jewish people had endurance. The Land raised up tremendous bounty, flowered and prospered for her people. True, hard times there were, and are…

We, the people of Itamar are an enduring people. We have patience and know that the work is hard. Please help us in making Eretz Yisrael flourish, as Hashem and our prophets have promised us in an everlasting brit.