Cries for revenge accompanied by accusations that government ministers are “traitors” dominated the funeral of Gilad Zar, the 41-year-old security officer for northern Samaria settlements who was assassinated yesterday morning in his car outside Kedumim, the northern West Bank settlement.

Two other settlers, 53-year-old Sarah Blaustein and 20-year-old Esther Alon, both from Efrat, were murdered in a Palestinian ambush on the way to Zar’s funeral convoy from the Prime Minister’s Office to Itamar, via the Karnei Shomron road near Kedumim where Zar was killed.PMto review restraint policy, Page 2Meanwhile, Shin Bet chief Avi Dichter and West Bank Palestinian Preventive Security chief Jibril Rajoub met last night in Jerusalem, in the presence of an American representative, while top generals from both sides met in the formal security coordination meeting as part of the effort to begin implementation of the Mitchell Report.

The security coordination session began at 8:30 P.M., in Ramallah, with Central Command Maj. Gen. Yitzhak Eitan, and Judea and Samaria commander Brig. Gen Benny Gantz on the Israeli side, and on the Palestinian side, Amin al-Hindi of the Palestinian Intelligence service, Tawfik Tirawi of the General Intelligence service and Haj Ismail of the Palestinian security forces. It was the first time Tirawi participated in a security session since the outbreak of the Intifada. An American representative also took part in that session. A similar session is planned for today in Gaza. 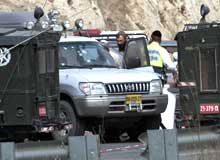 Zar was shot dead yesterday morning at the Jat junction east of the Kedumim as he drove by in his four-wheel drive vehicle. An ambush involving at least two gunmen, said IDF sources, shot at him from the distance, then approached the car and fired at least two full magazines of ammunition into the car and its driver. An organization calling itself The Regiment of Al-Aqsa Martyrs informed wire services in Beirut that it was responsible for the murder.

The two women from Efrat, on their way to the Zar funeral procession, were killed not far from the Neve Daniel settlement in Gush Etzion, on the Jerusalem-Samaria road. A passing car fired at them. Blaustein and Alon were seriously wounded, with Blaustein dying where the car stopped, and Alon dying in the hospital. Three others in the car were also wounded.

Gilad Zar, one of the founders of Itamar, was the son of Moshe Zar, convicted in the mid-1980s as a member of the Jewish Underground, for serving as the driver of the getaway car when members of the underground planted bombs that crippled then Nablus Mayor Bassam Shaka. He spent only a few months in prison, and was released for reasons of health.

Moshe Zar is one of the leading Jewish land dealers in the West Bank, and is known as one of the key financiers behind Gush Emunim and the Jewish enclave in Hebron. Arabs once attacked him with an ax, plunging it into his skull. He nonetheless managed to reach safety and hospital and later continued his work, which in one of his rare statements to the press he called “redeeming the land for Israel.”

Judea and Samaria Commander Brig. Gen. Benny Gantz yesterday said the army had no proof that Gilad Zar was specifically targeted by the ambushers. But participants in the funeral were convinced that Gilad, who only two months ago was shot under similar circumstances, but like his father before him managed to reach safety and hospital, was indeed targeted.

The funeral procession for Zar began yesterday with a demonstration outside the Prime Minister’s Office, continued to Itamar, the settlement he founded, and then to not far from the scene of the murder, just below the three-story mansion his father built nearly 30 years ago at Karnei Shomron, and from which he runs his land dealing operation.

At one point, near Itamar, an exchange of fire between Palestinians from a nearby village and IDF troops in the area prevented the convoy from continuing.

At each stop on the way, eulogists spoke of Gilad Zar’s selfless work on behalf of the settlement community – and lashed out at the government. Moshe Zar was heard asking “where’s Arik Sharon, my personal friend. Is he afraid to show his face?”

Three of the most hardline ministers in the government, Tzipi Livni, Avigdor Lieberman and Rehavam Ze’evi all spoke on behalf of the government. Livni was shouted down by settlers, with Gilad’s sister Anat Cohen, a prominent Hebron Jewish community activist, grabbing the microphone from the minister and shouting “You have tanks and planes. Start fighting and stop talking.”

Both Ze’evi and Lieberman warned that “revenge is not a private affair,” apparently conscious of the emotional turmoil in the angry crowd, which drew thousands of Gush Emunim supporters from throughout the territories. But they, too, were shouted at by the crowd. Lieberman said “we can’t go on eulogizing the fallen” and asked “forgiveness from the family, the friends and all here at the funeral. We tried and aren’t succeeding.”

When Ze’evi warned that “revenge is not a private affair,” calls of “traitor” and “resign” came from the crowd.

National Religious Party MK Shaul Yahalom, one of Gush Emunim’s first generation, explicitly called on the government “to avenge the murder, cease the cease-fire and kill the murderers.”

Rabbi Moshe Levinger, a friend of Moshe Zar’s for more than three decades, and his in-law through the marriage of their children, called for the immediate establishment of 10 settlements new settlements. Daniella Weiss, of the Yesha Council of Settlements, said “it’s time to face it: We are at war and should rid the country of all of the enemy.”

Gilad’s wife, Hagar, told television reporters that her husband “died for the nation.”

Zar’s murder yesterday prompted rioting in the Jewish sector in Hebron, with Jewish settlers attacking Arab pedestrians and fighting IDF troops who tried to prevent the settlers from taking the fight into Arab Hebron.

Gilad Zar, like his father, rarely spoke to the press, but after he survived the last ambush against him, he told reporters that “we have to put (the Arabs) on their knees, send them back in time 15 years and make them grateful every day for us letting them work for us.” He said that “us pleading with them for peace and a cease-fire is abnormal … the right way is to create a different situation in which they beg us for a cease-fire.”

In addition to his wife, he left eight children, the oldest 15, and the youngest a few months old