Bahar- Lag Ba’Omer May 16, 2008 Rabbi Shimon Bar Yochay was one of the five surviving students of Rabbi Akiva that all died between Pesach and the Atzeret. It is brought down that these 24,000 students perished because of not honoring one another in the way of speech. Instead of saying good and encouraging things and finding good points in each other, they fell into disapprobation, criticism and condemnation. This was known as the “dark, dark time of dispute.” It was so dark that it was actually impossible to see one another, the core of the problem. The rectification for this was the teachings of Rabbi Shimon who is called the “Bootzina Kadisha”, the holy candle. Whatever he said, gave light. In the holy Zohar, Rabbi Shimon tells his talmidim, “Ana, bechavivuta taley-” “all of our success depends on an amiable attitude, and being pleasant.” This affects our relationships so that we can all become vessels that bring down Divine light and make the world a brighter place. This is why we light the bonfire on Lag Ba’omer, in the merit of Rabbi Shimon who brought a great light through his teachings. In Kabbalah, Da’at is the key tool needed to see and speak only good things. When a person is on the level of da’at, then he can transmit thought processes positively into speech. When a person looses his da’at, or has not attained it- he dips into foolishness- much of this is furnished by the negative side of his imagination. It is critical to know that what we say to people can either “Make them or break them.” What we say to our children builds them. What we say to our students, if not said with the utmost sensitivity can leave a blemish on them for the rest of their lives. What we say to our parents, and the Torah marks a special mitzvah in this- is one of the Ten Commandments! How we relate to our spouses, neighbors, communities and the world at large, but Rabbi Shimon says that it starts with what we say to ourselves. Dear Readers, After celebrating 60 years of independence I feel compelled in the wake of this Torah to say, hopefully from the place of da’at, a few comments on this country we have been living in for the last 23 years. It has become pretty commonplace to see people with a “thumbs down” attitude. In many conversations there’s a lot of ostracizing. Especially for those of us who hold the Land dear and can’t fathom why the State at large does not share these same values. Gush Katif, a thriving region of proud Jewish people was plowed down only to become the forefront of Katusha rockets aimed at urban centers. The north Shomron communities that were evacuated now stand empty, closed military zones that almost touch our major power plants. Why? Mistakes, terrible mistakes have been made. Corruption reeks from our Prime Minister’s office. There is no leadership, and no hasbara. Those that want to wipe out Israel have become the “negotiators” and the settlers are constantly being portrayed as the bad guys. What is up is down and what is down is up. (A sure sign of the redemptive process!) I believe that this is all a test. We certainly pray to Hashem not to test us anymore. Can we step out of this darkness and also see the above nature things that are happening here too? Eretz Yisrael is giving her fruit beayin yafa- the bounty is mesmerizing. It is expensive for sure- but what were people eating 60 years ago here? The fruits and vegetables from the good earth are larger, tastier and beshefa (in abundance)more than any other time in history. The variety of people that live here from very black to very white from every country of the 4 corners of the world sends chills of excitement down my spine. Prophesies are coming true every day. The Land is calling her people home to her. In the last 10 years one million olim chadashim (new immigrants) have been absorbed by 5 million. That’s like America absorbing 60 million people! Can this be fathomed?! Israel’s economy is growing in leaps and bounds. The superhighways, buildings, buildings, bridges and yes- the hilltops of the Shomron are all going up before our very eyes. We are not an oil rich country but our minds are our assets. High tech and satellite industries are flourishing. Our army is strong, and a wonderful melting pot of all young people who meet and bond patriotically. It has won many wars when all the odds were against them. The chesed (kindness committees) that have been set up and working are testimony to a true torah loving people. Speaking of Torah, Israel is today the largest Torah learning center of the entire world. Ki Mitzion tetzeh Torah! Israel is a beautiful country that continues to grow. Come and see it, come and join it and help make it a better place. Please help this process by shining your distinct light! Shabbat Shalom- Leah Goldsmith 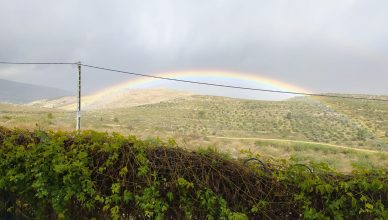