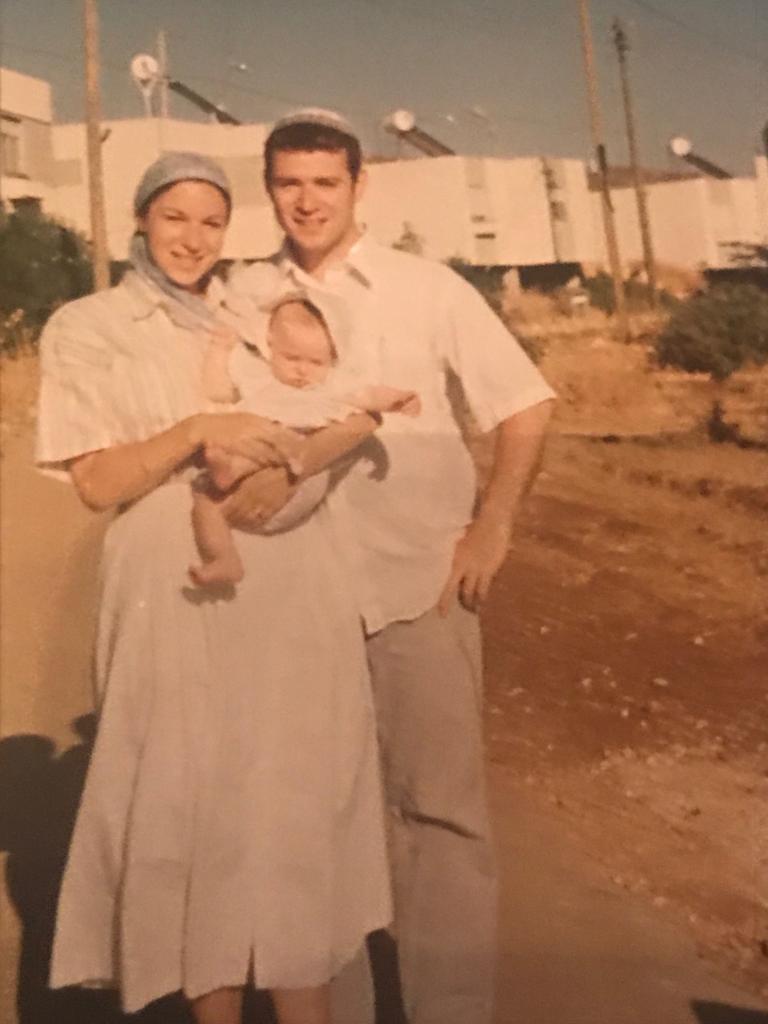 I’ll never forget the day we made Aliyah, just a few weeks after our wedding which turned out to be the biggest goodbye party of all times. Just to make it clear, in 1985 not very many people were making Aliyah from America. It was an ecstatic euphoric celebration that we videoed of course. Getting ready to board the plane to Israel, my parents had a steady solid look in their eyes, like they believed in me. Who were we kidding- we were twenty one years old with not a clue, only knowing our ideals: to settling the bald rocky mountains of our homeland, the land of our forefathers and of our history. We were two Americanos who didn’t know how Hashem would use us, we walked after Him in an unsown Land. A year later after spending time in an absorption center in Jerusalem we found ourselves joining the original Garin that settled Itamar. We had a small prefab perched on a bald hill overlooking no- man’s land, the setting so demanding and different from the Brooklyn New York we had come from, the human setting too. Die hard pioneers, stoic, serious and not knowing Friends, Macy’s or the subway ride to Manhattan – they became our new reality. Opening up the box of the video of our wedding excitedly we watched the blessings of our friends and family- Moshe’s Uncle Milty had a special smile for us as he said, “Moshe and Leah- may you find what you’re looking for!” I know he thought we were nuts, but there in our backyard, with its small patch of grass that would have seemed like a dot of green on a huge tan expanse had us feeling at home. It colored us with the vibrant blessing about to happen in this sleeping fairy tale of Israel come alive. See how the mountains turn from black to green. The sleeping giant awakes! I was enchanted with every day. Hard pregnancies, difficulties in transportation, troublesome terror attacks were only the beginning of the chapter of my life I would call “Growing Up”. I was in another life on my own away from the comfort of my loving parents. Moshe went to Eilon Moreh every day to study for the Rabbinate, which took thirteen years. All the while, the parents had us believing our dreams. Even later when fierce opposition took ahold of people on Israel and the heartland, as people were murdered on our roads and in their homes here, I was graced in the steady glowing support of my mom and dad. I soon found myself the mother of young soldiers and being that same steady rock in deadly times, truly knowing motherhood for its real meaning. Dark, severe days were warmed in our love and support for each other. We surrounded ourselves in it, built a fortress in it; we are a family of watchmen on the walls.

Parshat Masey begins with the motion of the journeys of Israel on their pilgrimage to the Promised Land. Always on the move, each footstep had a soul-searching lesson in reaching a level of maturity and willingness. At the end of the forty years a new generation came to settle down. Like Abraham who had been promised it but had to pay for it, till its soil, fight in wars, and purge it of paganism they were “on their own” with no Moshe Rabbeinu to babysit or drink bottles of manna anymore. Parenting is sometimes not an easy thing. We spend a great deal of our time nourishing, providing for, worrying about, and investing a great amount of energy into our children only for them to ultimately leave us. This Parsha teaches that the trek we make together through thick and thin leads us to the next generation, the new frontier that we helped them reach with our faith in them and theirs in us. Now is the time that Israel needs to take the “bull by the horns”- even the Promised Land which is a G-d given GIFT has many tasks and tikkunim. It is time to leave the Midbar and inherit the Land.

Jeremiah: 2:2- “Thus says the Lord- I remember in thy favor the devotion of thy youth when thou didst go after Me in the wilderness in a land not sown. Israel is holy to the Lord.”