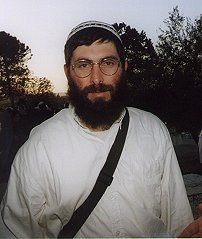 Itamar Resident Buried Meir Lixenberg, 36, father of five, was murdered yesterday afternoon by Arabs on his way home from work. As his car approached his home community of Itamar, south of Shechem, shots rang out; the driver was unhurt, but drove immediately to the nearby army base when he saw that his friend had been hit in the head. Efforts to revive Meir proved fruitless. The IDF, in response, destroyed a PA paramilitary post in Kalil, between Itamar and Shechem.

Meir Lixenberg, a member of the Itamar Local Council, was buried at 3PM in his hometown, and many thousands participated in the funeral. The family and Itamar had originally wanted the procession to leave from the Prime Minister’s Office, but this was canceled by army request. Itamar’s Rabbi Natan Chai said during his eulogy that the IDF had advance information on the presence of the terrorist cell in one of the local Arab villages, but because of the order not to hurt civilians, whether or not they are protecting terrorists, the army did not liquidate the cell.

Rabbi Avi Ronsky of Itamar told Arutz-7 today of the great loss his community had suffered: “Michael [pronounced Micha-el] was head of security for the four Shechem-area communities here [Brachah, Itamar, Yitzhar, and Elon Moreh], and he was very involved in arranging programs for bringing families to visit and to live. This very Shabbat a large group of people is coming to us – completely arranged by Michael… We are a strong community, people here are made of rock – but this is undoubtedly a strong blow. He and his wife, who is the communal coordinator here, are among the pillars of our town. In addition, he was a very friendly, pleasant, well-liked man…” Rabbi Ronsky did sound one positive note, however: “Families that were having a hard time of it here, in terms of security and finances, became more determined [to remain after previous violence], and new families came. I assume that this will happen again as a result of this terrible murder.”

Rabbi Ronsky, a senior officer in reserves, was asked what could be done against these fatal roadside shootings. “There is much that can be done,” he said. “Without going into details, we do know where these terrorists come from, and we know where their ammunition depots are. They are all in Area A [under PA control]. We have to act much more forcefully in Area A, and not just once in a while… In addition, it should be noted that in many places, much of Area B [under Israeli security control and PA administrative control] is becoming Area A, in that the army barely ever enters. This gives the terrorists more room in which to work…” He said that in many Yesha areas, the army has deployed only about 50% of the forces that really should be there.