It’s the final countdown; only one week and yikes we will be free. Looking around I find that nothing short of a miracle… How the hands become cracked and dry, the back hurts and I’ve been using too much bleach. How many times can you go to the garbage dumpster and how many old Tupperware can you have? I find myself deviating from my work to eye the bread on our table, looking at it and trying to understand it. It takes on a whole new being and even seems peculiar. Here today and gone tomorrow, I’ll be better off anyway without those bagels, challahs 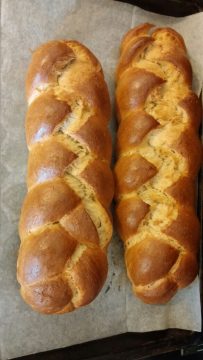 Didn’t the whole saga in Egypt actually start with Yosef who dreamt about the wheat stalks? He interpreted the dreams of the baker and Pharaoh and then saved bread for the seven years the world screamed for it. The baskets of good and plenty and a good financial planning system really became the starting point of our cozy stay in exile. We got honored. We got comfortable. It was the golden era for a while. Then things changed and we began to forget who we were because as it says in the Torah, “And a new king took over Egypt who did not know Yosef”. They forgot us and we forgot us. It became difficult and we became meek, ignorant and worse of all, indifferent. We became slaves and had painstaking work that prevented us from knowing and being – who we were. Fast forward and we witnessed ten plagues and the fall of the Egyptian Empire. It took years but then- the appointed hour for our deliverance came and there was no time to bake bread. Poof- you have less than 18 minutes to pack up and get out.

All through the two thousand years of our exile have we been so focused on the Judaica aspect of having everything for the seder- all the little items from the seder plate to the burnt shank bone to the dishes of salt water to make it just right. We enjoy learning the esoteric meanings behind things like in matzah we don’t let the dough rise, relating to our ego and to being humble and not so puffed up. But, for the first time in two thousand years we can observe and differentiate- working hard in slavery -vrs.-earnest hard muscle obligation in being free. It’s a mind switch within the mitzvoth we do and perform but when we say, “Why is this night different than other nights?” now the message of the matzah is knocking on your front door, tapping you on the shoulder persistently, it’s saying, “This night is different because in exile you ate bread but when it was time to leave- it meant GET OUT NOW! There is no time for baking bread there anymore.” From exile you will walk out with a burnt piece of matzah. If you’re lucky.

It’s important to be heedful. The Haggadah is a book we read out loud about overcoming obstacles and opening a new place in our psyche. But it also relates to us right now as Hashem is in His everlasting presence turning the world and bringing us closer to His design at all times- then now and tomorrow. It’s a lot of work and as it unfolds it becomes more evident that you can either work hard play hard work hard play hard in a land that Yosef will eventually be forgotten or sweat in literal pain of birth pangs as you are being delivered where he is come alive. Just read Ezekiel 36, 37.

I met a person once who later became a close friend. He came up with his wife to Itamar many years ago when we were in painful contractions in many realms. Not knowing me, he handed me a piece of paper and said, “I was a Marine in the Vietnam war. We went to hell and back but the graffiti someone scrawled over our barracks sure was encouraging.- ” It said- “The difficult we do immediately. The impossible takes longer”.