Mazal Tov to Rabbi Chaim and Razilia Shachar on the Brit milah of their son, Achiyah Yosef, this week.  Rabbi Chaim is a teacher at the Itamar Yeshivah and his wife Razillia is the daughter of Rabbi Israel Ariel from the Temple Institute.

Itamar welcomed the visit of our dear friends Robbie and Rivky Watman that visited Israel this week. Robbie and Rifky have been standing behind Itamar for many years. May Hashem bless them with all the special blessings of life.

This Shabbat we had the honor of hosting Ezra and Chanah Yachin. 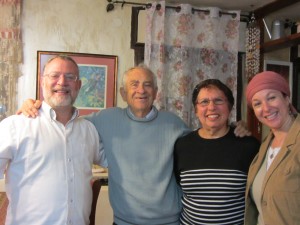 Ezra is a former Lechi freedom fighter that participated in many battles including the liberation of Jerusalem from the hands of the British regime and later in the War of Independence.  In one of these battles he was seriously injured when he was struck by a mortar shell.  Ezra is a well-known writer and a highly regarded lecturer. He has written over 8 books and gives more than three lecturers a day all over Israel to soldiers, policeman, secret service, high schools and universities.

This week the women of Itamar had a “Master Chef” happening of over a hundred participants where different recipes were prepared and later tasted in our new community center.  We hope to publish in the future some of these delicious recipes on our website.

Enjoy the picture of the beautiful Itamar sunset.