‘No one can fill your shoes’

By Margot Dudkevitch Jerusalem Post May, 30 2001 JERUSALEM (May 30) – Thousands gathered outside the Prime Minister’s Office in Jerusalem yesterday to mourn the murdered Gilad Zar, 40, calling on Prime Minister Ariel Sharon to leave his office and “get to work.”

Anger and frustration were voiced by many; some called for vengeance, while others termed Sharon “chicken” and declared it was time to end the “silence of the lambs” and respond harshly to Palestinian violence.

As the funeral cortege set out from Jerusalem, where it headed for Zar’s home in Itamar before reaching Karnei Shomron where he was buried last night, Palestinians in Kafr Kalil shot at the company, inviting an IDF response of light weapon and tank shell at the source of the firing.

On March 26, Zar was moderately wounded when Palestinians opened fire on his car as he travelled near the Yitzhar Junction. He was hit in the chest, leg, and hand, but despite his wounds managed to reach the nearby army base in his car. He underwent surgery and was released from hospital soon after, continuing his work as Samaria regional security head, on call 24 hours a day.

Speaking at the funeral, his brother Oren declared his heart was broken. “Seventy days ago you were wounded, and yet the Almighty granted you 70 more days to live. Why not 70 years? You were a walking legend… no one can fill your shoes.”

Rabbi Moshe Levinger declared that the IDF should have entered Nablus and confiscated the weapons from the Palestinians.

Samaria Regional Council head Bentzi Lieberman described Gilad as a strong, determined, but sensitive man. “It is hard for me to accept that I will never again hear his voice on the two-way radio, and that we must continue the war without one of the greatest heroes.”

Zar was the scion of a well-known pioneering family. His father Moshe, a Jewish landowner who purchased thousands of dunams of land from the Arabs over the years, was also a member of the Jewish underground. In 1984, the elder Zar was sentenced to several months’ imprisonment for his involvement in the 1980 bomb attack on Nablus mayor Bassam Shak’a, who lost both his legs in the explosion. In 1983, Moshe was attacked by an ax-wielding Arab, who slashed his neck and shot him outside his hilltop mansion in Karnei Shomron.

Binyamin Regional Council head Pinhas Wallerstein said that Zar was respected and loved by many. “Everyone, from the hilltops to the cities, knew him and respected him,” he said.

Zar is survived by his wife Hagar and their eight children 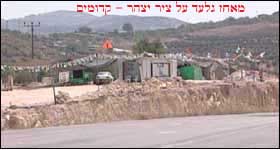